From March 12th to 15th, we hosted a Plone-React sprint at our office in Bonn. The main goal of this three day sprint was to contribute back the work we did for a recent client project. We also planned to upgrade Plone-React to React 16 and improving the error handling.

A small and very focused sprint with the core contributors of Plone-React was the perfect opportunity to do so. Participants were Rob Gietema, Roel Bruggink, Asko Soukka, Victor Fernandez de Alba, Carsten Senger and me.

We started the first day of the sprint by doing a quick stand up and planning meeting. We used the days before the sprint to outline our main goals and objectives, so we could get started right away. 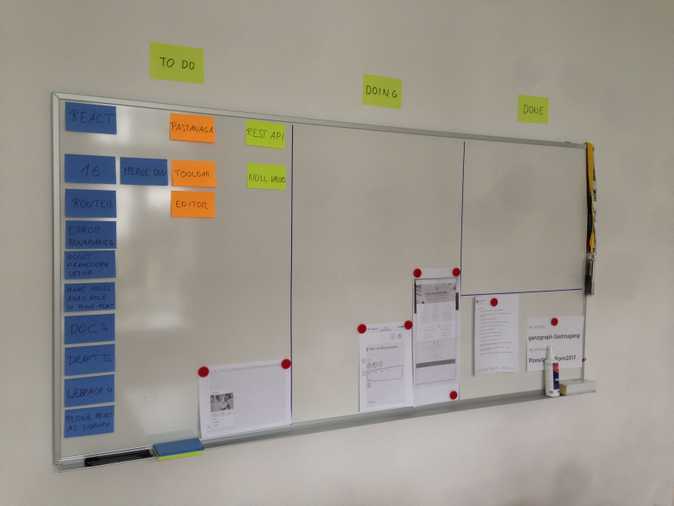 Planning board after the stand up

On the first day Rob and Victor worked on upgrading plone-react to use React 16 and Webpack 4.

We postponed the upgrade to React router version 4, because some of the dependencies that we need, are still in alpha phase and staying with the old version does not hurt right now. 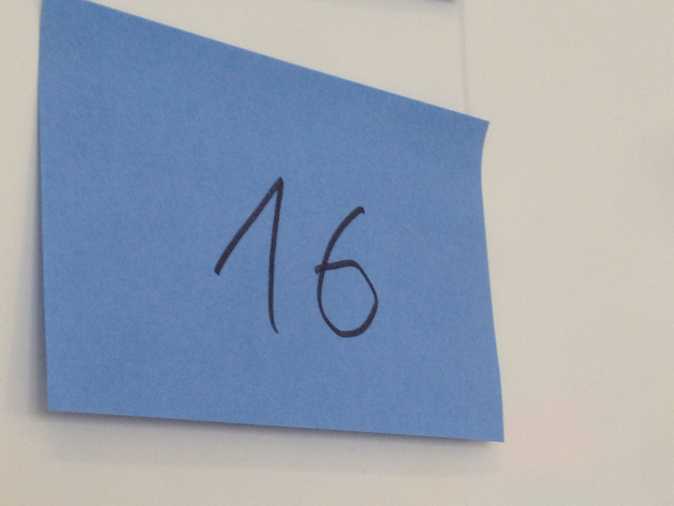 Card to upgrade to React 16

The main reason why we were eager to upgrade to React 16, was a new feature called “error boundaries”, which allows catching errors in React components and handle them gracefully, without failing the entire app.

Victor implemented error boundaries for client and server side components and for the Redux middleware. It is also possible to pass those errors to Sentry for aggregation and further error handling.

Since we are about to launch our first Plone-React-based project in the next weeks, this was something that was especially important for us.

Rob added a token expiration middleware to plone-react that improves the handling of JWT auth token in Plone-React. Working with plone-react on a daily basis revealed a few edge cases where the current authentication failed. The new middleware solves those issues.

Roel and Carsten focused on plone.restapi. Even though this was not planned to be a major topic for the sprint, we had to fix some issues that were causing troubles in the Plone-React frontend.

Carsten worked on fixing an issue that was preventing to allow the API consumer to reset field values to “None”.

Roel started to work on exposing widgets with tagged values via plone.restapi. This is necessary to support autocomplete or reference widgets in Plone-React.

Asko, who joined the sprint remotely, worked on a brand new end-to-end testing setup with Robot Framework. Because this would be way to easy for a super-smart guy like Asko, he decided to wrap the components into a Docker containers, to make it easier for non-Python devs to set it up. Making Plone PIP-installable is also something that we want to have for quite a while. Asko decided to also mix that in. To make this fun, he decided to add support for Jupyter notebook, which makes it super easy to write Robot Framework tests. 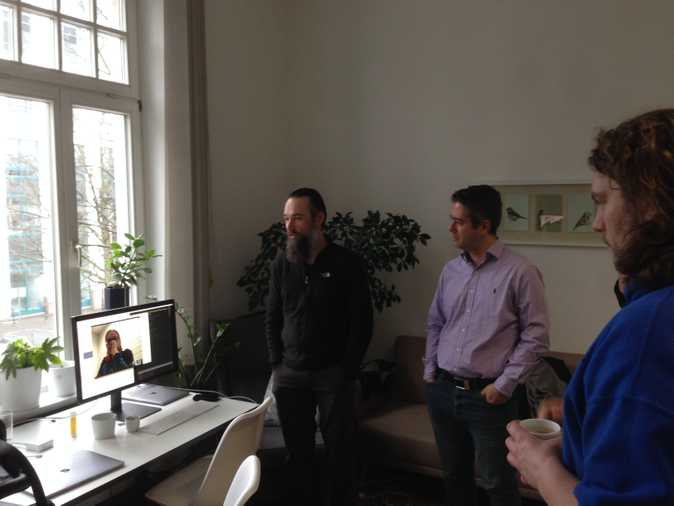 I started the day discussing the acceptance testing setup with Asko, quietly listening to Rob and Victor and discussing the plone.restapi issues with Roel and Carsten.

During the first day, we started a discussion how plone.restapi could support a toolbar that automatically adapts to the permissions of the logged in users and shows only the actions that this particular user has permission for.

Before the sprint Victor worked on implementing the new super fancy adaptable Pastanaga toolbar, and we were eager to build a proper backend implementation for this.

Victor's tweet with a short demo of the new Pastanaga toolbar

On the second day of the sprint, Rob and Victor started to look into building a “create-react-app”-like functionality for Plone-React. create-react-app is a widely popular code skeleton generator by the React team at Facebook. It hides lots of complexity from the user (e.g. Webpack, libraries, configuration) and makes it easy to get started with React. This is super important for the adoption of Plone-React because it also allows to use Plone-React as a library and basis for custom client projects.

Rob and Victor created a proof-of-concept that kind of works but it became clear that this requires a lot more effort before this becomes ready-to-use.

We scheduled a time slot for a discussion and planning session about the new “Pastanaga editor” user experience. We already implemented basic text editing based on the DraftJS editor from Facebook. The current editor allows basic text editing as well as inline (italic, bold, etc.) and block styles (e.g. headlines, bullet points) and external links.

The next step on our agenda to make this editor based on Tiles to make it extendable and allow the user to add images, videos and other media objects.

We agreed on moving forward with an agile approach of building something useful step-by-step, making sure to build a fully functional and useful editor at any point of the development stage, rather than building the full Mosaic-like functionality at once.

Right after this was settled, we started to draft a tiles endpoint that would build the basis for the next iteration of the Pastanaga editor.

Rob started to work on implementing the context-aware toolbar. This was a challenge because the toolbar needs to adapt to the content that is shown in the main column. This means a component deep down the component hierarchy (content) needs to be able to update a component that lives outside of the DOM hierarchy of the parent component. Luckily for us, “Portals” in React support exactly that use case.

Victor worked on the flexbox styling of the toolbar as well as on optimizations of the Webpack configuration.

I followed our established documentation-first approach on plone.restapi and wrote the docs for the new tiles endpoint.

With the basic test setup already in place, Asko struggled with the Travis CI setup running different versions of Node and Python at the same time. Problem is that the ZEO version requires the latest Python 2.7.13 which is not shipped by default with Travis CI.

He also worked on a Docker compose option to support an option to run the API server. This would allow faster development of Robot Framework tests since the API server does not need to restart for each test (iteration).

We started the last day of our sprint discussing the create-react-app use case we worked on the day before. Afterwards, we did a hangout with a student who is interested in working on this during the Google Summer of Code 2018. 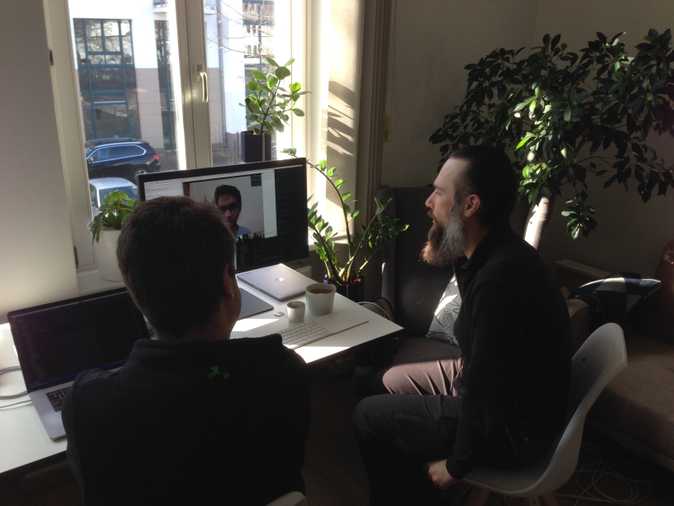 Hangout with a possible Google Summer of Code student

Right after this call, Asko gave me a tour of the new, Docker compose based, PIP-installable, Jupyter notebook enhanced test setup.

My head was still spinning from Asko’s amazing work, when Rob asked me for a minute to show me a prototype of the new Medium-like Pastanaga editor.

My head is still spinning from the #robotframework based acceptance testing setup walkthrough by @datakurre earlier today. Then @robgietema comes along and shows me a working prototype of the new #Plone Pastanaga editor for plone-react. Mind-blowing! pic.twitter.com/2VLLvIkgQf

The sprint was extremely productive and fun. Having a small and dedicated group of developers with a clear goal and focus really worked well for us. 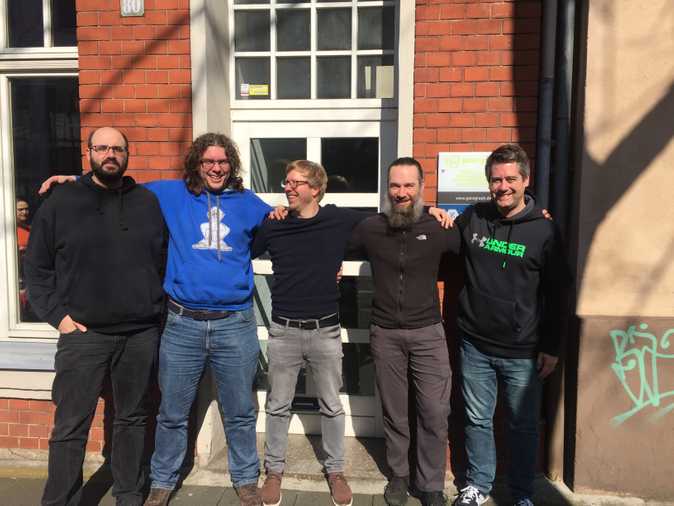 Group photo in front of the kitconcept office

We contributed back all our re-usable code from our client project, upgraded Plone-React to React 16. We fixed some important issues in plone.restapi and build a super fancy test setup that will allow us to further improve the software quality of Plone-React.

We also laid the groundwork for the next important steps forward: Building the new Pastanaga editor with a tiles-based backend and allowing to use Plone-React as an extensible library with a “create-react-app”-like functionality.

We are already looking forward to the upcoming Beethoven Sprint and the Costa Brava sprint where we will continue to push Plone-React, Pastanaga and plone.restapi.