Report of the first day of the Plone Beethoven Sprint 2018 in Bonn, Germany

The Beethoven Sprint was a “strategic” sprint that took place June 21-25 at the kitconcept office in Bonn, Germany. The focus of the sprint was to work on the Pastanaga editor, Plone-React, plone.restapi, and Guillotina. This is the report of the first day of the sprint.

Stand-up of the first day

We started the day with a stand-up meeting giving people a heads up on the current state of affairs of plone.restapi, plone-react, and Guillotina.

I started with plone.restapi, which is considered stable and battle tested in production.

Victor Fernandez de Alba then gave a brief introduction to our first Plone-React based project VHS-Ehrenamtsportal, that we successfully shipped to our client a few weeks ago and run without any issues since then.

After this, Rob Gietema gave a short introduction to the current state of Plone-React.

Last but not least, Ramon Navarro Bosch presented “Guillotina”, an async server written in Python with a Cockroach DB / ElasticSearch backend that adopts some of the core concepts of Zope and Plone.

With a group of 15 sprinters, we decided to split up in four different groups for the main sprint topic. Thomas Buchberger led the plone.restapi group, Rob the Plone-React group, Victor the Pastanaga Editor group, and Ramon the Guillotina group.

Right after the stand-up, we had a longer discussion about the “tiles” endpoint in plone.restapi and the editor implementation in Plone-React. We already reached an agreement of the API design at the Plone-React sprint a few months ago. Though, it turned out that implementing that on top of the existing plone.tiles implementation was harder than we thought and we did not anticipated all the problems that came along with that.

We decided to keep the API design and to write a simple Dexterity behavior that adds a “tiles_layout” field for the layout information and a “tiles” field that holds the actual data of the tiles. Ramon already wrote a JSON-field in the Guillotina code that we decided to re-use for our implementation.

Rob Gietema already wrote a first prototype of the new editor at the Plone-React sprint and he was waiting for the backend code to be implemented. While we were working on the backend implementation, he focused on the prototype. 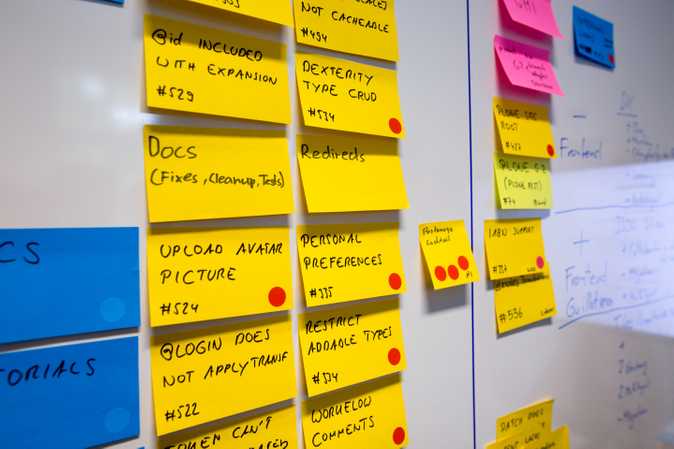 Planning board with plone.restapi issues

Lukas Graf added missing translations in plone.restapi responses and simplified the test setup and did some clean up on the code (https://github.com/plone/plone.restapi/pull/545).

David Glick and me worked on Zope 4 compatibility for plone.rest and plone.restapi. It turned out that one of my fixes on plone.rest was already sufficient and that the test failures in plone.restapi were caused by a plone.testing issue that David found and fixed (https://github.com/plone/plone.testing/pull/49).

Roel Bruggink continued his efforts on turning the Plone site root into a Dexterity object. He worked on making the IPloneSiteRoot interface / content object behave more like content and he attached behaviours to the IPloneSiteRoot to edit them without relying on a default page.

Rob gave an introduction to the Plone-React codebase and explained the basic concepts and libraries that we use in Plone-React.

Eric Steele started to work on creating the add-ons control panel in React. Carsten Senger took over the work that Rob started before the sprint to bring the users and groups control panel to Plone-React.

Andrea Cecchi. and Johannes Raggam worked on the React-based widget for references in Plone.

After giving an introduction to Guillotina to the sprinters, Ramon went ahead and made Plone-React work on top of Guillotina. Since it origins, plone.restapi and Guillotina were supposed to share the same API to allow us to switch the backend for our new frontend at some point in the future. Ramon was also heavily involved in the API design of plone.restapi and wrote the first version of plone.rest before he decided to invent Guillotina. Over the time both APIs differed because of differences in the underlying implementation.

Ramon and Rob worked on this and by the end of the day they could present a working version that allows basic content editing and browsing.

We had a hangout with Philip Bauer from Munich who is leading the efforts to migrate Plone to Python 3 and Zope 4.

Philip and I already had a longer discussion about a possible roadmap for Plone 6 and how to bring our efforts on the frontend together with the efforts of the group that works on Python 3 and Zope 4. We discussed the outlined roadmap and the upcoming sprints where we plan the implementation of the roadmap.

We went to have lunch in a Vegan cafe (Black Veg) and to a traditional brewery in the old part of the town for dinner (Bierhaus Machold). After dinner and a few drinks, we decided to head back to the office for some late night hacking. Not without stopping by at a local “Kiosk” for some customary buying of beverages for the evening.